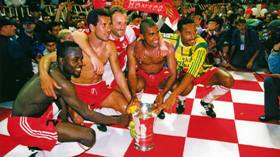 The experienced striker, 32, put on a show as the Principality club thrashed a Nantes side with Moses Simon 4-1 at the Stade Louis-II on Sunday evening, scoring a hat-trick in the comprehensive win.

According to Monaco's official website, Ben Yedder's 28th minute strike was his 77th in a Monaco shirt, equaling Victor Ikpeba’s historic record, and becoming the 6th top scorer in the Club’s history.

Yedder converted a spot kick in the 62nd minute to take his overall tally to 78 goals combined in all competitions and surpassed the retired Nigeria international in the process.

Nicknamed the 'Prince of Monaco' by former Nigeria Sports Minister, Emeka Omeruah, Ikpeba netted 55 goals in the Ligue 1 for Monaco,  fourteen in European competitions, three in the Coupe de la Ligue, four in the Coupe de France and one in the Trophée des Champions.

After six seasons at AS Monaco, Ikpeba joined Borussia Dortmund in 1999, and had spells at Real Betis, Al-Ittihad and Charleroi before retiring in 2006.