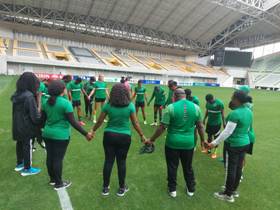 Head Coach of the Super Falcons Randy Waldrum has disclosed the reason behind playing Grade A friendlies ahead of the 2023 FIFA Women's World Cup.

Waldrum believes that the class of teams they've been facing during the friendlies are going to help them adapt to whatever team they will have to play against at the mundial.

The Super Falcons of Nigeria will take on Nadeshiko Japan in an international friendly at Misaki Park Stadium on Thursday 6th of October, 2022.

Speaking with the press ahead of the game, the American tactician said:

"We play these kinds of games against the best in the world, because we know that's what it's going to be like at the World Cup.

"We just got back from the US, playing USA and now we've come here to Japan, to play against one of the world's best as well".

Waldrum went on to disclose that this encounter will serve as a learning curve for the young team that he has at his disposal.

"We've got young players here with us, and I think it's one of those things that we need to find out where we're lacking, where we're deficient and we know playing teams like Japan will expose us in some areas we need to improve on.

"I always believe you don't get better if you don't play the best competition. That's one of the reasons we wanted to come here because we know the quality of the team here in Japan. And will certainly prepare us for the things we need to work on over the next 12 months".

With less than 24 hours to the friendly with Japan, Waldrum doesn't have a full matchday squad to prosecute the game.

This will be the fourth meeting between Nigeria and Japan. The Nadeshiko won two of the previous three meetings, 2-0 and 2-1 in 2013.

Nigeria's only win against the Asian giants came at the 2004 Olympic Games in Greece.

The 66-year-old spoke about Nigeria's objective at the 2023 FIFA World Cup, saying they want to make a deep run in the tournament.

"We feel like we have the talents to do that, we just need time together with the team to prepare properly."