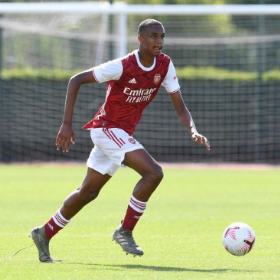 He has been registered on Arsenal's List B for the Europa League as he is classed as an U21 player.

A player may be registered on List B if he is born on, or after, 1 January 2001 and has been eligible to play for the club concerned for any uninterrupted period of two years since his 15th birthday

Awe has received one call-up for a first team game, against Wolverhampton Wanderers at the Molineux Stadium on February 10, 2022.

In the current season, the Hale Ender has started every single game played by Arsenal U21s in the Premier League 2, helping them remain unbeaten after seven matches in the youth league.

Bodo/Glimt are topping Group A of the Europa League with four points but have played one more game than Arsenal, whose matchday two fixture with PSV  originally scheduled for September 15 was postponed.