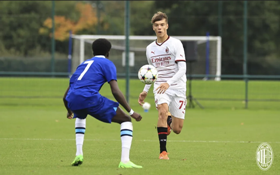 Promising striker Tudor Mendel-Idowu made his UEFA Youth League debut for Chelsea on Wednesday afternoon as they were held to a 1-1 draw by Italian side AC Milan at Cobham Training Center.

Mendel-Idowu wasn't the only player of Nigerian descent on parade at Cobham Training Center as Lagos-born holding midfielder Victor Ehuwa-Eletu started and was in action for 62 minutes for the Rossoneri.

AC Milan's excellent start to the game was rewarded in the tenth minute as Jan-Carlo Simic was quick to pounce on the rebound after a free kick caught the Chelsea goalkeeper napping.

Mendel-Idowu was involved in Chelsea's best chance of the half in the 34th minute when he combined with Acheampong to set up Soonsup-Bell, who saw his shot saved by the Milan netminder.

In the 65th minute, Leo Castledine prevented the Blues from suffering their second defeat in the group stage as he finished off a swift counter attack.

In his first squad involvement for Chelsea in the UEFA Youth League, exciting fullback Somto Boniface was a non-playing substitute against the Italians.

After three games in Group E of the UEFA Youth League, AC Milan are leading the way with five points, while Chelsea are bottom but are three points behind the Italians.