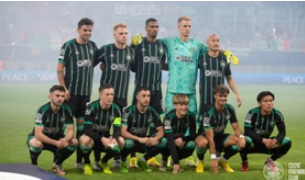 Allnigeriasoccer.com's round-up of the Nigeria-eligible players who were on parade for their respective clubs on matchday three in the UEFA Champions League on Wednesday, October 5.

At the Red Bull Arena, Moritz Jenz was unable to prevent Celtic FC from losing 3-1 to RB Leipzig.

The German-born defender was paired alongside Stephen Welsh for the third time in a row but couldn't inspire the Hoops to their first UCL group stage win of the season.

Christopher Nkunku gave the hosts the lead in the 27th minute before Jota equalized two minutes after the restart.

However, a brace from Andre Silva was enough to guarantee the German club the maximum three points.

In Group G, Paul Mukairu featured for FC Copenhagen in their 5-0 loss to Manchester City.

Mukairu was brought on in the 66th minute as a replacement for Viktor Claesson.

Chelsea defeated AC Milan 3-0 in a Group E clash at Stamford Bridge. Wesley Fofana, Pierre-Emerick Aubameyang and Reece James were all on the scoresheet tonight.

Carney Chukwuemeka missed out on the matchday squad despite returning to training this week.