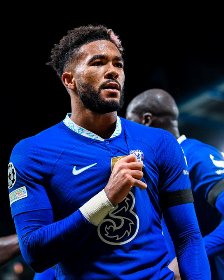 Chelsea had lost one game and drawn another heading into the match and required a win to keep pace with Serie A champions AC Milan and RB Salzburg respectively.

Wesley Fofana and Pierre-Emerick Aubameyang had put the Blues ahead and were coasting to a victory but James who provided the assist through a cross for Aubameyang's goal in the 56th minute ensured that the Rossoneri had no chance of a memorable comeback with his near post finish.

Ekoku who was on match commentary duties for BT Sport applauded the quality of his goal.

"Yes its difficult when the top teams in the Premier League really are on full throttle for some of the best sides in Europe to actually live with them.

"It's been a power play from Chelsea. That's a superb finish from Reece James - that's a an accomplished finishing from a defender in the final third," the onetime Norwich City striker said from the commentary box.

"Weighted pass from Raheem Sterling. It was perfect.

"He (James) can do whatever he wants to do with it. He can really put his foot on it, he can side foot it with power to the roof of the net as he did. He could have driven it across goal for ha teammate,"Ekoku, a, member of the Super Eagles squad that lifted the 1994 African Cup of Nations in Tunisia explained.

Both sides will square up again in the reverse fixture at the San Siro next week Tuesday.