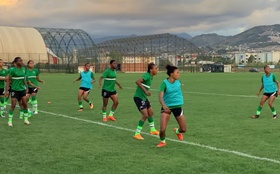 The Super Falcons of Nigeria were defeated 2-0 by Japan in a pre-World Cup friendly on Thursday morning.

Second half goals from Mina Tanaka were enough to extend Nigeria's winless run against the Japanese women's football team to three.

Allnigeriasoccer.com presents five things that were noticed in the friendly encounter held at the Misaki Park Stadium on Thursday.

The Super Eagles however, wore the new jersey during their international friendly encounter against the Fennec Foxes of Algeria in September.

Why the Randy Waldrum led girls wore an out of date jersey remains unknown.

2) Young Players: The Super Falcons matchday squad for the encounter had five members of the 2022 Falconets.

Out of the aforementioned names, only Deborah Abiodun was involved in the game.

3) Transitional Play:  With less than ten months to the mundial, the Nigerian girls are still struggling with transitioning from defense to attack.

Nigeria wasn't able to make accurate forward passes despite having numerous chances to cause havoc to the Japans.

The midfielders had so many loose passes in the game and that rendered the forward line useless.

Whenever the Falcons lost the ball, they found a way to prevent Japan from having a free pass to the goalkeeper. Bar the penalty incident, the defense line of the falcons had a good outing.

5) Missing Senior Players : It's no longer news that the squad Randy Waldrum paraded was a youthful one.

The likes of Asisat Oshoala, Francisca Ordega, Toni  Payne and skipper Onome Ebi were not available for the encounter.