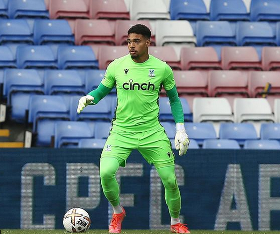 The Eagles, through their official website, published the latest training images and additionally confirmed that Goodman, who stepped-up from his duties with the Under-21s, trained with the first team at Copers Cope.

Goodman wasn't the only youngster of Nigerian descent monitored by Vieira as the Frenchman also put Malcolm Ebiowei, Eberechi Eze and Michael Olise through their paces.

Goodman represented Crystal Palace's first team during pre-season preparations but was not named in the traveling squad to Singapore and Australia.

This season, he has established himself as Crystal Palace U21s number one goalkeeper, having started each of their last seven games in the Premier League 2, keeping two clean sheets while conceding nine goals.

He is eligible to represent Nigeria, Canada and England at international level.