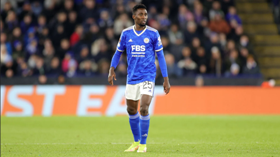 Speaking to the national media in England inside the King Power Centre at LCFC Training Ground on Thursday, Leicester City manager Brendan Rodgers has confirmed that he won't be able to count on Wilfred Ndidi for the Premier League game against Bournemouth.

Ndidi  was forced to leave the international training camp in Constantine, Algeria after suffering a relapse of an injury he sustained against Tottenham Hotspur.

The holding midfielder managed to recover for the visit of Nottingham Forest on Monday but was withdrawn from the game at half-time.

Rodgers has revealed that it was an injury-enforced substitution when Ndidi made way for  Boubakary Soumaré.

Tests carried out have shown that the Nigeria international suffered a hamstring strain and won't be in the squad to face the Cherries.

Providing a squad update, Rodgers was quoted as saying by Leicester City's official website : "In terms of the squad, Wilfred Ndidi will probably be out for a little bit.

"He came back from international duty with a hamstring strain. He recovered well but he felt it at half-time in the game and he was a little sore, so he might miss a few weeks."

Ndidi has been hampered by injuries in 2022, missing the tail end of last season due to a serious injury he picked up against Rennes, which required surgery.

He has missed the last seven games played by the Super Eagles, including the double header against Ghana in the 2022  World Cup playoffs.