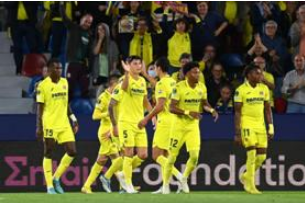 Nigeria-eligible footballers were in action in the third tier of UEFA competition, Europa Conference League on Thursday for their respective clubs.

Allnigeriasoccer.com takes a look at the outstanding individuals from matchday three.

At the Estadi Ciutat de València, Villarreal coached by Unai Emery thrashed Austria Vienna 5-0, with Nigeria international Samuel Chukwueze in action for the La Liga side for 65 minutes.

The Yellow Submarine opened the scoring through  Álex Baena in the 18th minute, the winger profiting from an assist from Chukwueze.

Baena curled a half volley into the far corner after his Nigerian teammate crossed to the far post.

In the 25th minute, Chukwueze came close to doubling the lead when he curled a left-footed shot past the angle of the post and bar.

Nigerian-born Netherlands international Arnaut Danjuma. poked the ball into the far corner to make it 2-0 in the 43rd minute before a late hat-trick from Morales sealed the win.

Elsewhere, 2009 Golden Eaglets star Yusuf Otubanjo's red hot form continued as he got on the scoresheet for Pyunik in their 2-0 success against Zalgiris at Vazgen Sargsyan anvan Hanrapetakan Marzadasht (Yerevan).

His 60th minute strike meant he has now scored in each of his last four matches in all competitions.

After three matches in Group H, Pyunik are second in the table with six points ahead of their trip to Lithuania next week.