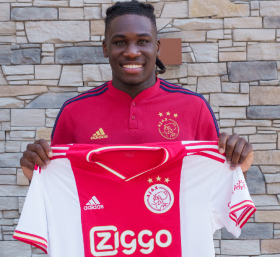 In the summer transfer window, Ajax agreed a deal with Rangers to sign the Super Eagles defender for an initial fee of 23 million euros and the total transfer fees could rise to 26.5 million euros if performance-related variables are included.

Following his transfer to the four-time European champions, Bassey become the most expensive Nigerian defender in history, overtaking the legendary Super Eagles central defender Taribo West who moved to Inter Milan from Auxerre in 1997 in exchange for 12 million euros.

Rangers also confirmed that the deal taking Bassey to the Amsterdam club is the largest in the club's history.

Bassey had a fine start to his career at Ajax, helping them post five straight clean sheets but has come in for criticism of late.

Jansen said on Pak Schaal Podcast, via Ajax Showtime : "With Bassey you can already conclude that Ajax has paid the absolute top prize for him with 23 million.

"Given his current qualities, it would have made more sense to pay five to ten million euros for him.

"He still has a long way to go when it comes to football. Perhaps that will still happen".

Rangers made an astronomical profit on Bassey who was signed from Leicester City for a fee of 230,000 pounds in the summer of 2020.