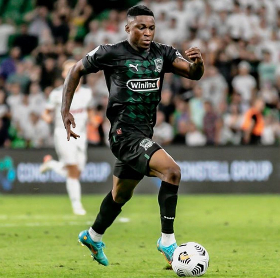 Former Nigeria U17 international Olakunle Olusegun scored the fastest goal in Russian Premier League history on Sunday as FC Krasnodar were beaten 3-2 by Rostov on matchday 12.

According to the official website of the Russian Premier League, Olusegun opened the scoring 8.9 seconds after the starting whistle and became the holder of the fastest goal in the history of the RPL, which has existed since 2001.

The 2019 FIFA U17 World Cup star beat goalkeeper Sergey Pesjakov with a curled effort from just outside the penalty area after Rostov lost possession in their own half.

The holder of the previous record was another Nigerian striker Emmanuel Emenike, who netted in the tenth second for Spartak Moscow in their 2-1 win at Alania with Unai Emery watching from the away team dugout.

In the history of the  Russian Championship , former Shinnik midfielder Alexei Bychkov also scored in the ninth second in the match against Rotor on August 4, 1999.

This season, Olusegun has bagged four goals from eleven appearances in the Russian Premier League and also found the net in the Russian Cup, bringing his total to five in 2022-2023.