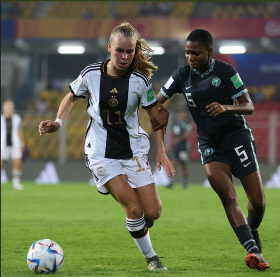 Nigeria's U-17 women's national team Flamingos on Tuesday began their FIFA U-17 Women’s World Cup in India on a losing note with a 2-1 defeat in Goa against Germany in the second Group B game of the tournament.

Miracle Usani scored Nigeria's goal and the first of the contest but the Germans came from behind to score twice.

Earlier Chile had beaten Nigeria's next group opponents New Zealand 3-0 which made a win for Bankole Olowookere's team of the essence.

The Nigerians started on a shaky note defensively as they left huge spaces for the European champions to exploit but Flamingos' goalkeeper Faith Omilani was able to save from the efforts of Svea Stoldt, Alara Sehitler and Mara Alber.

Nigeria went close to scoring in the 18th minute when top scorer during the African qualifiers Opeyemi Ajakaye pounced on a loose ball, turned swiftly and let fly a rasping shot which Germany goalkeeper kept away with a fingertip save.

The ball came off the frame of the post to deny the Nigerians their first goal of the tournament.

However there was no denying the African side in the 30th minute when defender Miracle Usani popped up in the middle of Blessing Emmanuel and Taiwo Afolabi to drill a low fizzing effort from a free kick after captain Alvine Dah-Zossu was fouled at the edge of the box.

The Flamingos made half time substitutions with ineffectual Taiwo Afolabi replaced by Amina Bello while Dah-Zossu also got substituted by Bisola Mosaku.

Germany equalised three minutes into the second half through Svea Stoldt who steered the ball into a gaping net as her marker Comfort Folorunsho was left stranded by the nimble forward.

A glimmer of hope to extend the lead for Nigeria came up in the 58th minute but Ajakaye's shot inside the penalty box was weak.

Alber sneaked past a porous Nigerian defence to hit a low shot to the bottom left corner in the 61st minute after poor communication from the central defensive part of the Africans.

Adeshina's shot from 25 yards in the 66th minute went straight to the waiting hands of the German keeper.

The Flamingos had a chance to restore parity in the 90th minute through an indirect freekick but the ball was smothered by Eve Boettcher.

Germany attacked the Nigerian defence relentlessly towards the end of the game in search of a third goal but the game ended 2-1 in favour of the Europeans.