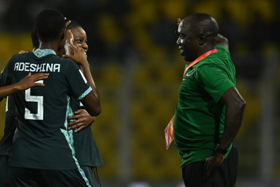 The Flamingos of Nigeria were defeated 2-1 by the German national team at the ongoing FIFA U-17 Women's World Cup holding in India.

Miracle Usani's 30th minute strike wasn't enough to give the Bankole Olowookere led side their first victory of the tournament.

Second half goals from Svea Stoldt and Mara Alber enabled the Europeans to perform a comeback victory over Nigeria.

Allnigeriasoccer.com presents five things that were noticed during the 90-minute encounter.

1) Dramatic coach: Nigerian tactician, Bankole Olowookere was full of action throughout the game.

He communicated with the girls in the local dialect and dramatized his instructions from the touchline.

2) Counter attacking style of play: The Nigerians allowed the European champions to dominate the game and  have a larger chunk of the possession.

They relied heavily on the pace and strength of the forwards in causing havoc on the break.

3) Ability to win balls: The Flamingos didn't allow their opposition to spend much time on the ball while they approached their territory, making sure that they applied pressure on the ball carriers.

4) Disjointed passes: Nigeria had promising moments in the game, but they failed to make it count due to their shortcomings in the final third.

5) Opeyemi Ajakaye is a star:  Despite not getting on the scoresheet, she was a thorn in the flesh of the Germans. Graceful mover and the focal point of the attack.