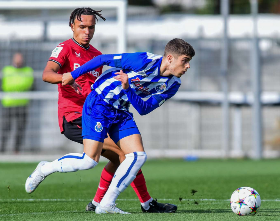 Talented German-born midfielder of Nigerian descent Joshua Eze opened his UEFA Youth League account on Wednesday but his goal counted for nothing as Bayer Leverkusen suffered a 3-1 defeat at the hands of Porto.

With their loss to the Portuguese, Bayer Leverkusen have bowed out of this season's UEFA Youth League as they have no point to their name after four matches in Group B.

Bayer Leverkusen U19s coach Sven Hübscher made two changes to his starting line-up from the win at Rot-Weiß Oberhausen, one of which saw Eze replace Arjanit Fazlija in midfield.

A second player of Nigerian descent, Francis Onyeka came off the bench for the final six minutes for the German club.

Umaro Candé opened the scoring for Porto with a left-footed strike in the 16th minute as the visitors took a 1-0 lead into the break.

In his fourth appearance in the UEFA Youth League., Eze equalised with a shot from ten yards that went in with the help of the post.

Porto secured their third win in the group thanks to goals from Jorge Meireles and Ussumane Djaló in the final ten minutes.

Eze has been on the books of Bayer Leverkusen since 2010 and signed his first professional contract in May 2022.