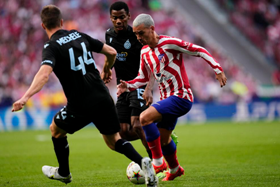 Nigeria-eligible footballers were in action for their various clubs in the matchday four of the 2022/2023  UEFA Champions League.

It was an eventful evening that brought mixed feelings for the footballers and their fans.

We start in group A, Napoli defeated Ajax Amsterdam 4-2 to qualify for the last sixteen. Hirving Lozano (4'), Giacomo Raspadori (12'), Khvicha Kvaratskhelia (62') and Victor Osimhen (89') all scored for the Naples based outfit.

Davy Klaassen (49') and Steve Bergwijn (83') found the back of the net for Alfred Schreuder's men.

Calvin Bassey assisted Davy Klaassen to score and also got booked in the 66th minute.

Asides scoring, Victor Osimhen also got booked in the 90th minute after taking his shirt off while celebrating.

Moving to group B, Raphael Onyedika featured for ten-man Club Brugge in their goalless draw with Atletico Madrid, while Antonio Nusa was an unused substitute.

The result was enough to seal Brugge's passage to the round of 16.

Still in group B, Zaidu Sanusi went the full ninety as FC Porto were 3-0 winners over Bayer 04 Leverkusen at the BayArena in Germany.

Wenderson Galeno put the visitors into the lead in the 6th minute after an assist from Diogo Costa.

The Portuguese giants extended their win in the 53rd minute as the in-form Mehdi Taremi scored from the penalty spot.

Taremi would go on to score his second of the night eleven minutes later.

And in Group C, Viktoria Plezen to orchestrate an upset or a draw in their match against FC Bayern Munich. The Czezh Republic giants suffered a 4-2 defeat in the hands of the Bavarians.

Nigerian striker Fortune Bassey made the matchday squad but  was an unused substitute.

Goals from Sadio Mane, Thomas Muller and Leon Goretzka (x2) were enough to seal the victory.

In the second half, Adam Vikanova and Jan Kliment got on the scoresheet for Plezen.