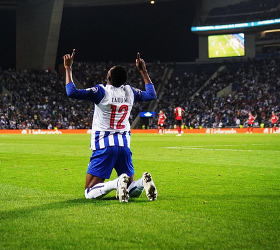 Matchday 4 of the UEFA Champions League took place on Wednesday with mixed feelings for Nigerian stars.

Napoli booked their place in the round of 16 when they defeated Ajax 4-2. Porto also secured a win, a 3-0 away win against Bayer Leverkusen in Group B.

Club Brugge advanced to the knockout stages after their scoreless draw against Atletico Madrid in Group B. They currently have 10 points.

Victor Osimhen (Napoli) : Super Eagles striker Victor Osimhen scored an 89th minute goal for in-form Serie A side Napoli in a 4-2 win over Ajax at home.

Osimhen recovered from an injury setback and made quite an impression, pouncing on a Daley Blind error.

Overall the former Wolfsburg striker who came off the bench registered a joint game-high three shots, with his goal the one on target. Osimhen won one aerial duel. 7/10.

Calvin Bassey (Ajax) : The left back made two tackles, one clearance but had no interception in the defeat to Napoli.

According to stats from Whoscored, he won a joint game high three aerial duels and had 70 touches of the ball in the Group A clash at the Diego Maradona stadium. 5.5/10.

Onyedika had 45 touches of the ball, won one aerial challenge. He made one tackle and seven clearances. 6.5/10.

Zaidu Sanusi (Porto)  : Super Eagles left back Zaidu Sanusi had on his stats: one tackle, one interception and one clearance.