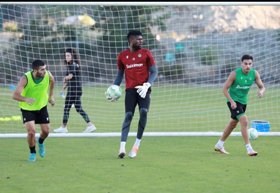 Omonia Nicosia's British football tactician Neil Lennon has made a decision on the starting goalkeeper for his side's matchday four UEFA Europa League clash against Manchester United at Old Trafford on Thursday evening.

The former Glasgow Celtic manager has gone for Francis Uzoho to be in between the sticks, a decision that sees Cyprus international glovesman  Konstantinos Panagi named among the substitutes.

Uzoho moved up the pecking order of goalkeepers following the injury suffered by first-choice goalie Fabiano, who was impressive in the 3-2 defeat to Manchester United a week ago.

Fabiano sustained a shoulder injury in a league game against AEL Limassol on Monday and faces at least three weeks on the sidelines, meaning he will miss the home game versus Real Sociedad (October 27) and is a huge doubt to face Sheriff Tiraspol (November 3).

Last season, Uzoho made four appearances for Omonia in the Europa Conference League of which three were starts and made his Europa League debut off the bench against Sheriff Tiraspol on matchday one.