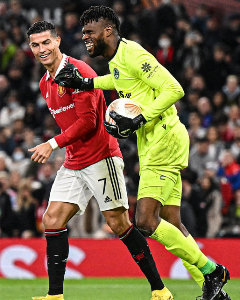 Nigerian players were in action on matchday 4 of the group stages of the UEFA Europa League on Thursday, October 13.

Man of the Match Uzoho made string of great saves in the match but inadvertently conceded a late goal from the relentless attacking threats of United forward led by Cristiano Ronaldo.

Midfielder Scott McTominay swept home a low shot from the penalty box in added time after 90 minutes on the clock as he benefited from a good work by Jadon Sancho. 9.5/10.

The striker was also part of the buildup for the other goal scored by Dante Vanzeir as his header in the penalty area found assist maker Teddy Teuma four minutes into the second half.

Boniface played for 90 minutes but was replaced four minutes into added time by Ousamma Azzouzi. 9.510.

Rasheed Akanbi Sheriff Tiraspol)  : Akanbi had a not too convincing performance and could not get on the scoresheet in a Group E match  between his Moldovan side Sheriff Tiraspol and Real Sociedad at the latter's Reale Arena home ground.

Akanbi played for 80 minutes before he was withdrawn. In the second half before his substitution, the striker had an injury scare after he fell awkwardly from an aerial duel.

Akanbi won five aerial duels and had 37 touches of the ball. His compatriot Iyayi Atiemwen was not featured in the game. 5/10.

Moses Simon (Nantes) : Super Eagles winger Simon made one key pass and had no interception to his stats  as his Ligue 1 side Nantes fell 4-0 to German Bundesliga club Freiburg at the  Stade de la Beaujoire - Louis Fonteneau.

Simon was in action for 73 minutes before he was replaced by Kader Bamba . 5/10.