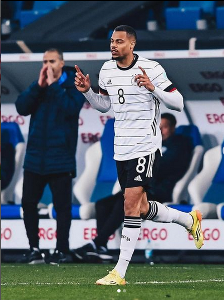 Born in Hamburg, the Wolfsburg striker qualified to represent the Super Eagles through his Nigerian father and England, where he was raised, before pledging his international future to his native Germany.

Nmecha played for all the youth teams of England, U16-U21, before declaring for Die Mannschaft almost three years ago.

His first international match for Germany U21s was a 2-1 win over England at the Vitality Stadium, where he came off the bench for the last 31 minutes in March 2019.

After winning the top scorer award at the 2021 European U21 Championship, the center forward was promoted to Germany's senior team, for whom he has played seven times since his debut.

Ahead of the 2022 World Cup in Qatar, Nmecha's aim is to be back into Germany reckoning having missed last month's 3-3 draw with England due to a knee problem.

"I think it's always an honour to play for your country," Nmecha told Whoscored.com,  when asked the confidence gained from being selected for the national team.

"There's a lot of, for example, Bayern players in the team, where they're winning every week. In the situation that we're in right now, to still get selected is very rewarding."

With 11 goals in 39 appearances since the start of last season, Nmecha is the fourth highest scoring German in the Bundesliga, behind Bayern Munich's Serge Gnabry (16), Borussia Mönchengladbach's Jonas Hofmann (15) and VfL Wolfsburg's Max Kruse (12).