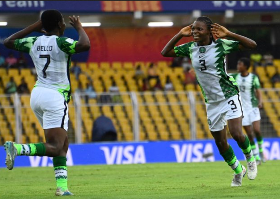 Amina Bello, Miracle Usani, Taiwo Afolabi and Edidiong Etim were all on target in a 4-0 rout of New Zealand in Nigeria’s second Group B game of the 2022 FIFA U-17 Women’s World Cup in India on Friday afternoon

Opeyemi Ajakaye was presented with a chance to put the Flamingos ahead when she pounced on a flicked header from Amina Bello but Aimee Feinburg Daniell in goal for the Kiwis cleared but the striker could cause an early damage.

Bello then headed Nigeria ahead in the 16th minute from a good cross by Adeshina. The ball squirmed through the arms of the New Zealand keeper.

Bello's cushioned low effort ten minutes later went agonizingly wide off target while moments later Ajakaye saw her shot at the edge of the box easily gathered after Afolabi and Dah-Zossu combined to tee her up.

Miracle Usani made it 2-0 in the 34th minute when her deceptively lofted cross was misjudged by the New Zealand goalie.

Bello's sidefooted shot in the 37th minute after good link up play with Ajakaye was disappointingly off target, same as Mosaku two minutes before the halftime break.

Mosaku also hit the crossbar in the 45th minute from a close range effort after another fine pass from Ajakaye who got the better of a desperate and sprawling keeper Aimee Feinberg-Danieli  on the ground.

The goalkeeper cleverly evaded the temptation to bring down Ajakaye in added time after the Nigerian striker went past her.

Danielli denied Adeshina a third goal Nigerian goal after a good piece of dribble and pass by Bello early in the second half.

Ajakaye header is parried away for a corner kick with an hour played on the clock.

Nigeria's shots at goal continued and could have seen the Flamingos score more but substitute Edidiong Etim's shot in the 72nd minute at the edge of the box was deflected for a corner.

Taiwo Afolabi scored a fantastic goal from 25 yards but was made to wait as the VAR had to check if there was an offside in the bulldup to the goal.

Etim fired home a powerful shot from distance with the ball nestling at the top right corner for the fourth Nigerian goal in the 90th minute.