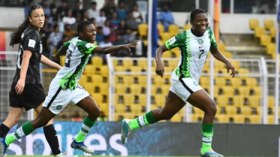 The Flamingos of Nigeria cruised to a 4-0 win over New Zealand in their second group game of the 2022 FIFA U-17 Women's World Cup.

The Bankole Olowookere led side registered their first win of the tournament courtesy of goals from Amina Bello , Miracle Usani, Taiwo Afọlábí  and Edidiong Etim.

Allnigeriasoccer.com presents five things that were noticed during the course of the game.

1) Goal of The Tournament Contender: The tournament might have just started but we have a goal of the tournament contender already. Taiwo Afọlábí scored a beautiful goal from long range and it was a strike that left spectators in awe.

2) Total dominance: It was a total dominance by the West African nation. They controlled the game from start to finish, having 67% of ball possession and also restricting their opponents from registering a shot on target.

3) Players In sync with coach: The players were seen having heart to heart talks with their gaffer. They also rushed to him whenever they scored in the game. This shows an open door policy from Bankole Olowookere.

4) Scanty Stadium: With the growth of women's football, it was expected that fans would turn out in their numbers for games, but the reverse is the case.

5) Conversion rate: Despite a huge margin of victory, there is a need to tutor the Nigerian girls on how to convert their chances. Perhaps if they were clinical enough, all of their 15 shots on target would have turned out to be a goal.

They'll face more technical teams as the tournament advances and it'd be a huge blow if their conversion rate is not improved.