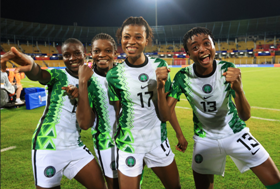 Nigeria's U-17 women's national team the Flamingos on Friday defeated New Zealand 4-0 to enhance their chances of qualifying to the knockout stages of the tournament in India.

Allnigeriasoccer.com presents the players ratings from the match.

Faith Omilana : The keeper made a good save early in the first half, punching the ball away for a cornerkick. .Her defenders were far better on Friday coupled with the weaker opposition. 7/10.

Miracle Usani : The right scored her second goal of the tournament with a deceptive cross shot that saw the ball misjudged by the Kiwis keeper. 8/10.

Tumininu Adeshina  : Playing at left back, Adeshina who is comfortable in the left side of  central defence assisted a goal and was generally impressive all through the game. 8/10.

Comfort Folorunsho : She had an improved game against New Zealand and was always at hand to cover for Adeshina whenever the latter goes forward to support the attack from the left wing. 7.5/10.

Shakira Oyinlola  : Oyinlola was assured in defence. The more advanced of the defensive duo in the middle when they had to bring the ball out from the back. 7/10.

Mary Aderemi : The defensive midfielder had little to do as New Zealand had less threat than Germany. Nonetheless it was a good game. 6/10.

Blessing Emmanuel : The deputy captain was efficient in the middle of the park but it could be said that her performance against a better German opposition was more impressive. 6.5/10.

Alvine Dah-Zossu : The captain of the team is a trickery customer but she hasn't quite showed her pre tournament form in India.

Substituted again on Friday like she was in the defeat to Germany. 6/10.

Taiwo Afolabi : The creative midfielder had a far better performance on Friday than she had on Tuesday. The 15 year-old capped her outing with a fantastic strike in the 75th minute. 8/10.

Bisola Mosaku : The winger was a good outlet for the positive things that coach Bankole Oloworooke wanted to do. Had a couple of good chances to score but she has to work on her finishes. The buildup to her goal scoring chances are promising. 7/10.

Amina Bello: Skillful, fast and difficult to keep quiet. Bello paired Opeyemi Ajakaye in attack and was a threat throughout with her footwoork, passed, shots. Excellent. 8.5/10.

Opeyemi Ajakaye : Strong and powerful striker did not score against New Zealand but created a lot of problems for the Kiwis. 9/10.

Edidiong Etim : Came off the bench on Friday and scored the fourth goal in similar fashion like Taiwo Afolabi - a spectacular long range shot. 7/10

Omamuzo Edafe  : Came on in the 88th minute and came close to scoring but saw her shot go narrowly wide off the target. Not enough time to be rated.