Uzoho is most viewed player Transfermarkt, ahead of Man City, Man Utd and PSG strikers 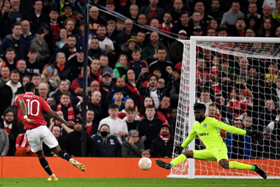 After his stunning display against Manchester United in the UEFA Europa League on Thursday night, Super Eagles goalkeeper Francis Uzoho is the most viewed player in the last twenty four hours on the Transfermarket website that assesses the valuation of footballers.

The Omonia Nicosia glovesman was the standout performer as the Cypriot side almost caused an upset against their illustrious Premier League opponents until the third minute of stoppage time when Scott McTominay scored the game-winning goal.

Uzoho has earned rave reviews from his opponents and teammates for his brilliant display at Old Trafford.

The 2013 U17 World Cup winner is the top ranked player ahead of some players who are considered the best on the planet.

Uzoho is currently valued at 450,000 euros by Transfermarkt