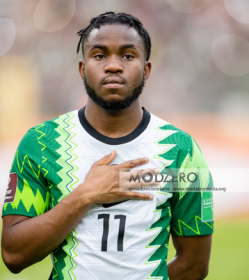 Allnigeriasoccer.com's review of the Nigeria-eligible players that found the net for their respective European and Asian clubs in league matches on Saturday, October 15, 2022.

In Italy, Ademola Lookman scored for the third game running as Atalanta BC were 2-1 winners over Sassuolo.

Goals from Mario Pasalic and the Nigeria international were enough to extend Atalanta's unbeaten run in the league to 10.

Moving to the Belgian Pro League, Paul Onuachu was on target for KRC Genk ìn their 1-0 away win over Oud-Heverlee Leuven.

Onuachu's 16th minute goal helped Genk leapfrog Royal Antwerp into first place on the log. He has scored in each of his last three games for the Limburg club in the top-flight.

Goals from Moudou Tambedou, Chinoso Offor and Zinho Gano guided Waregem to a 3-1 away win over KV Kortrijk.

Younes Belhanda opened scoring for the visitors in the 37th minute, before Akintola added another three minutes later.

In the added time of the first half, Onyekuru was booked by the center referee.

Stephane Bahoken reduced deficit for Kasimpasa in the 56th minute. Onyekuru scored Adana Demirspor's third in the 63rd minute to dash any hope of making a comeback.

Badou Ndiaye rounded up the scoring in the 86th minute, making it four for the visitors.

And in Romania, Christian Irobiso's goal could not prevent Petrolul Ploiești from falling 2-1 to CS Universitatea Craiova.