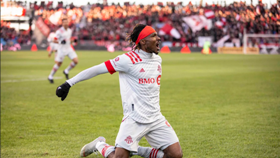 Enugu-born striker Ifunanyachi Achara is in search of a new club ahead of the 2023 Major League Soccer season.

According to the official website of MLS, Toronto FC have updated their squad list and declined the option to extend his stay at the club.

He departs Toronto FC after making thirty appearances spread across three seasons, scoring three goals while providing two assists and was in action for 1286 minutes.

Achara  was selected 25th overall in the 2020 MLS SuperDraft out of Georgetown University and captained the Hoyas to the NCAA National Championship as a senior.

The hardworking striker had a promising start to his Toronto career, scoring on his Major League Soccer debut against New York City on March 7, 2020, a feat that earned him a place in the MLS Team of the Week

However, he missed the remainder of the season after suffering a torn anterior cruciate ligament (ACL) and lateral collateral ligament (LCL) in his left knee.