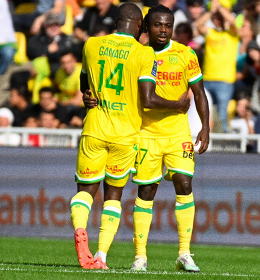 Nigeria winger Moses Simon found the back of the net in FC Nantes 4-1 win over Stade Brestois 29 at the Stade de la Beaujoire - Louis Fonteneau  on Sunday afternoon.

The 27-year-old ended his six-game goal drought with a well dispatched spot kick.

Against the run of play, Stade Brestois took the lead in the 18th minute as Noah Fadiga combined well with Pereira Lage to break the deadlock.

Simon would go on to restore parity in the 35th minute following a delightful finish beyond the goalkeeper.

Nantes then took the lead seconds later through Ignatius Ganago.

Mostafa Mohammed put the game beyond the reach of Brestois in the 71st minute.

In the 88th minute, Moussa Sissoko sealed the emphatic victory for FC Nantes.

In the provisional standings of the French topflight, Antoine Kombouaré's men have amassed 10 points from 11 games.

Simon has contributed to five of FC Nantes' 13 league goals this term, scoring four goals and assisting one.

The Super Eagles star and his teammates are back in action when they take on OGC Nice in a league match at the Allianz Riviera next Sunday.