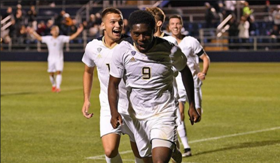 Vancouver Whitecaps confirmed that Kaduna-born center forward David Egbo has been released as the club declined the option to extend the 23-year-old's contract.

Three other players namely Janio Bikel, Evan Newton and Michael Baldisimo will also not be returning to the club.

Egbo was selected ninth overall by Vancouver Whitecaps in the 2021 MLS SuperDraft out of the University of Akron.

He is departing the Canadian club without making a single appearance for the first team, and was loaned out to Phoenix Rising and Memphis 901 in back-to-back seasons.

In 35 appearances combined for Phoenix Rising and Memphis 901, Egbo tallied six goals in the USL Championship - equivalent of second tier of American football.

Prior to his move to Vancouver Whitecaps, he played three seasons for the University of Akron, registering 21 goals and 12 assists in 35 starts on 56 appearances.