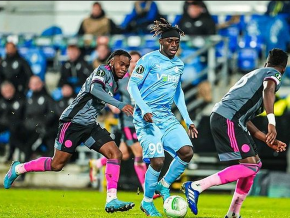 Super Eagles striker Stephen Odey has claimed that his first goal of the 2022-2023 season was inspired by none other than Arsenal winger Bukayo Saka.

Odey ended a goal drought stretching back 214 days when he opened the scoring for Randers in the 27th minute of a 2-0 win over Vendsyssel FF in a Danish Cup clash staged at the Nord Energi Arena on Thursday evening.

Randers broke the deadlock from their first real chance of the game as Odey slotted home from an acute angle after he was fed by Tobias Klysner.

His strike was similar to Saka's goal against Leeds United in a Premier League game on Sunday, October 16 when the Hale Ender blasted a shot into the roof of the net from an acute angle.

Speaking to Randers' official webpage on his first goal, Odey siad : "I watched an Arsenal game, a goal by Bukayo Saka, so I  said let me just shoot in the first place and see what's going to happen.

"If I miss as long as I have an attempt. It worked and I'm happy it went inside."

In truth, Odey has not been himself since the start of the season, firing blanks in thirteen consecutive matches in the Superliga before the trip to Vendsyssel FF.

About a year ago, the former Racing Genk man became the most expensive signing in Randers history after his loan deal was made permanent following a brilliant start to his career in Denmark.

"I'm still working hard to be the best of me and helping the team achieve something. I just have to keep my head up.

"By scoring today it is going to give me more motivation for the next games," Odey explained shortly after his brace against Vendsyssel FF.

Odey will be aiming to score his first of the season in the Superliga when Randers host FC Nordsjælland on Sunday, October 23.