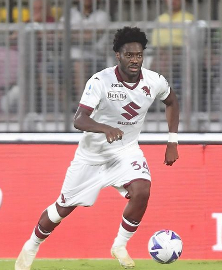 Chelsea academy product Ola Aina opened his account for the 2022-2023 season as Torino registered a hard-fought 2-1 win over Udinese in a Serie A match staged at Dacia Arena (Udine) on Sunday afternoon.

Tottenham Hotspur loanee Destiny Udogie and 2013 U17 World Cup-winning striker Isaac Success started for the Bianconeri, who were unbeaten in nine straight matches before hosting the team from Turin.

Aina opened the scoring in the fourteenth minute as he slotted into the bottom corner after the ball was laid into his path by Aleksey Miranchuk, ending a goal drought for Torino that stretched back to February 10, 2019.

It was his second career goal for Torino in the Italian-top-flight and curiously against the same opponents.

Gerard Deulofeu was presented with a bit of a gift to make it one apiece, assisted by Udogie in the 26th minute, and then Pietro Pellegri, with his first goal in this season's Serie A, netted what proved to the match winner midway through the second half.

The home team rallied after the goal but could not find a way back into the game as goalkeeper Milinković-Savić denied Beto in the closing minutes.

In the provisional standings, Udinese are sixth with twenty one points accumulated, while Torino are ninth with fourteen points.