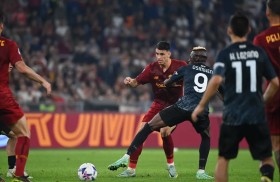 Napoli extended their winning streak to eleven games in all competitions as Victor Osimhen netted the only goal of the game against AS Roma at the Stadio Olimpico on Sunday night.

It is only the second time in their history that Napoli have won eleven matches in a row, since the 1929-1930 campaign.

In a game of few chances, the Nigeria international fired home a wonderful strike after getting the better of former Manchester United defender Chris Smalling with ten minutes left on the clock.

According to a video posted on Twitter by German-based Nigerian reporter Oma Akatugba, who was among the spectators at the Stadio Olimpico, Osimhen and Abraham met up after the game.

In a private chat, Abraham told Osimhen that 'he made the whole dressing room sad' after his goal saw Roma fall to their third defeat of the Serie A season.

Abraham made a splash in his maiden season in Italy, scoring 27 goals in all competitions and helped AS Roma win the Europa Conference League but has been out of form this term with only two goals in fourteen games.