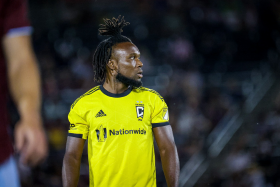 Columbus Crew signed Igbekeme on loan from Spanish Segunda División side Real Zaragoza in the January transfer window for the 2022 MLS season with an option to acquire him on a permanent basis at the end of the campaign.

The midfielder's loan deal with Columbus Crew runs out on December 31, 2022.

He appeared in twenty three matches in the American top-flight, of which eight were starts, and saw his opportunities limited in the last ten games of the season, logging only fifteen minutes.

Free Agency is scheduled to open on Wednesday, November 16 and eligible players will be at least 24 years old in the year in which the immediately preceding League Season concluded and have at least five MLS service years.

In the recently concluded season, the former United States U20 international was starved of game time, making only three starts over the course of the campaign.