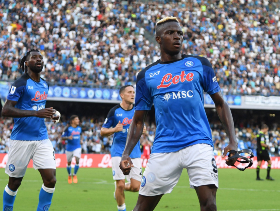 Two Nigeria-eligible stars playing in the Italian Serie A have been named in Whoscored.com's Europe's Top Five Leagues Team of the Week.

Europe's Top Five Leagues  consists of the Premier League in England, the Bundesliga in Germany, La Liga in Spain, Serie A in Italy, and Ligue 1 in France.

Osimhen netted his first career hat-trick at club level as Napoli thrashed Sassuolo 4-0 last weekend, while Aiwu was impressive for Cremonese in their goalless draw with Udinese, helping the Grigiorossi post their second clean sheet of the season.

There is a Premier League representative on the weekly accolade in the shape of Arsenal winger Reiss Nelson, who was involved in three of the five goals scored by the Gunners against Nottingham Forest.

With a rating of 9.7, Osimhen is the highest rated player in the Team of the Week for Europe's Top Five Leagues and Aiwu the least rated at 7.9.