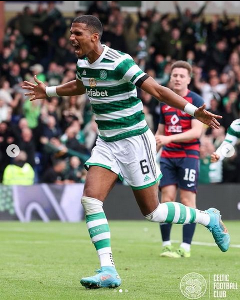 The Hoops signed the German-born player on a season-long loan, with an option to buy him outright from his parent club Lorient included in the deal.

Jenz was long on the radar of Celtic before they were able to get a deal over the line in July.

The 23-year-old reunited with his former teammate Matt O'Riley, whom he knows from their time together at the Fulham Academy in England.

He began his Celtic career in brilliant fashion, scoring on his debut against Ross County and netted with an overhead kick in the next league game against Kilmarnock FC.

On how his move came about, Jenz said to Celtic View Podcast : "It was even the last transfer window I was supposed to come but things didn't go that way.

"I was disappointed because I really wanted to come. Suddenly Matt came here as well and I was even more annoyed by it because he plays for this amazing club, I was jealous, Celtic you know big stadium, fantastic club.

"We kept speaking, Matt kept telling me how the club is, how the manager is and about his idea and philosophy. You get immediately like a really good feeling, this is a project I want to be in, this is a club I want to be in.

"They obviously got in touch again and I was very happy about it because this is good and I had a fantastic talk with the manager."

Jenz revealed that he remained in touch with Celtic after his proposed deal fell through last summer and was delighted to get another opportunity to join the club.

"You never know in football how things go with the decisions at clubs but there was always like communication between officials of the clubs and my agent.

"There was always a scenario that it could happen and luckily it happened. They were very patient and I was very patient as well and the timing was perfect. "

Jenz has established himself as a first team regular at Celtic, having started fifteen of their nineteen matches in all competitions since his arrival at Parkhead.