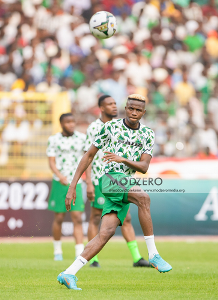 Chelsea defender Kalidou Koulibaly has mentioned Nigeria international and former teammate Victor Osimhen as one of the players at his former club Napoli that is close to him and whom he talks about in the company of his current teammates and friends at Chelsea.

Although the Senegalese believes it was the perfect time for him to exit the Serie A club, he still has fond memories of life on and off the pitch in Naples.

The Senegal international was teammates with Osimhen at Napoli for two seasons before sealing a summer transfer to Chelsea.

"This Naples is my Naples. I am happy to have contributed to the growth of the team," Koulibaly who is making a return to first team training at Chelsea’s Cobham training ground after missing out of recent games through injuries said.

"Do you know what I’m talking about in the Chelsea locker room? Of the victories of my former teammates. And do you know why? I’m proud of it.

"I often hear from (via phone calls and social media) Anguissa, Osimhen. I have also exchanged messages with Kvara, whom I don’t know yet."

Koulibaly may be included in Chelsea's matchday squad when they face off with Dinamo Zagreb in the UEFA Champions League on Wednesday with kickoff slated for 2100 hours Nigerian time.