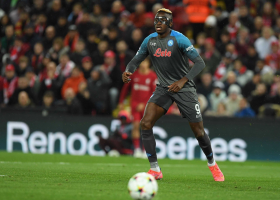 At Anfield, Victor Osimhen's effort was not enough to help Napoli avoid defeat to Liverpool.

On a four-game goalscoring streak heading into the game against the Premier League side, the number 9 fired blanks in 88 minutes of action.

The Naples based outfit's unbeaten run came to an end following a 2-0 loss to the Reds.

Mohamed Salah broke the deadlock in the 85th minute and Darwin Nunez doubled the advantage in the eighth minute of stoppage time.

Liverpool and Napoli both progress to the round of 16.

Still in Group A, Calvin Bassey had a triumphant return to the Ibrox Stadium with Ajax defeating Glasgow Rangers 3-1 in their final group game.

Bassey, who was making his first return to Scotland since his summer transfer to Ajax Amsterdam, played the entire duration of the game.

He prevented Rangers from taking the lead in the fourteenth minute, clearing Fashion Jnr's header off the line.

Steven Berghuis put the Dutch giants ahead in the fourth minute after combining with Mohamed Kudus.

The Ghanaian star then got his name on the score sheet by scoring Ajax's second of the game in the 29th minute.

James Tavernier converted his spot kick in the 87th minute to reduce the deficit for Rangers, only for Conceição to restore the Dutch champions two-goal lead with a minute of normal time remaining.

Bayer Leverkusen and Club Brugge played out a 0-0 draw in a Group B clash at BayArena.

At the Estádio do Dragão, Zaidu Sanusi suffered an injury in FC Porto's 2-1 win over Atletico Madrid.

The hosts raced into an early lead in the 5th minute with Mehdi Taremi scoring from an Evanilson assist.

Stephen Eustáquio extended the lead for the Portuguese giants in the 24th minute after combining with Wenderson Galeno.

Wendell then went on to replace the injured Sanusi in the 54th minute.

The Spanish giants reduced the deficit in added time following an own goal from Iván Marcano.

In Group C, Fortune Bassey couldn't inspire Viktoria Plzen to a win nor a draw over FC Barcelona as they lost 4-2.

The Nigerian forward was brought on in the 79th minute as a substitute for Tomas Chory, as his side were officially eliminated from the UEFA Champions League.

Marcos Alonso opened the scoring as early as the 6th minute after benefiting from a parried ball.

The Catalonia based outfit added another in the 44th minute through Ferran Torres who got assisted by Jordi Alba.

Plzen pulled one back in the 51st minute asTomas Chory scored from the spot.

Three minutes later, Torres grabbed his brace and Barca's third of the night after finishing off a scintillating move.

The hosts made it 3-2 through Tomas Chory in the 63rd minute with a brilliant header.

Barca restored the two goal lead as Torre Carral scored in the 75th minute with a thunderbolt.

Bassey would go on to make his fifth appearance in the UEFA Champions League, coming on as a replacement for Chory in the 79th minute.