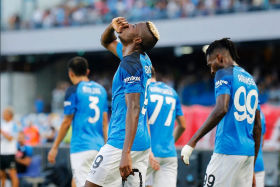 The seventh Team of the Week for FIFA 23 Ultimate Team was revealed on Wednesday evening, with Nigeria international Victor Osimhen making the cut.

The Napoli striker and two other players on the books of Italian Serie A clubs have been selected namely Antonio Candreva (Salernitana) and Stefan de Vrij (Inter Milan).

Osimhen has been picked in the FIFA 23 TOTW after netting his first career hat-trick at club level in Napoli's 4- rout of Sassuolo, taking his tally in the Italian topflight to seven goals from eight appearances.

The Super Eagles star has an overall rating of 85 and his best attribute is pace which is rated at 92, while his other stats are 85 shooting, 83 physicality, 80 dribbling, 68 passing and 42 defence.

Another Nigeria international striker Peter Olayinka is on the substitutes bench with an 81-rated card after his brace and assist helped Slavia Prague thrash Bohemians 1905 4-0 in the Czech Fortuna Liga.