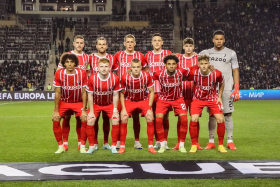 Super Eagles-eligible goalkeeper Noah Atubolu made his European debut for German Bundesliga club SC Freiburg in a 1-1 draw with Qarabag FK on matchday six of the Europa League on Thursday evening.

The 19-year-old is on the fringes of the first team and finally got his chance in the Europa League with qualification to the last sixteen as Group G winners guaranteed before the trip to Azerbaijan.

Touted as the top teenage goalkeeper in European football that could potentially play for Nigeria's senior national team, Atubolu made his senior debut for Freiburg last month when he started against St Pauli in the second round of the DFB Pokal.

He returned to the starting lineup against Qarabag FK, with Freiburg manager Christian Streich opting to rest ten of the starters versus Schalke 04.

Atubolu made a vital intervention to prevent Qarabag from taking the lead in the fifth minute when he saved a shot from Ghana international Owusu Kwabena.

In nine appearances for SC Freiburg II in the 3.liga, he has kept five clean sheets while conceding ten goals.