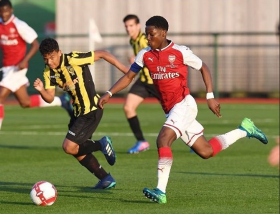 United States international of African decent Yunus Musah has refused to rule out a return to Arsenal in future.

Born in New York City to Ghanaian parents, Musah has a past connection with Arsenal, having represented their underage teams for seven years before sealing a transfer to Valencia in 2019 at the age of sixteen.

The talented teenager is under contract with Valencia until June 2026 and has a release clause of 87 million pounds (approximately N43.5 billion in Nigerian currency).

Arsenal were keen to keep hold of Musah and offered him a scholarship but he turned down the deal before switching to Valencia in search of first team football.

Asked whether he may return to Arsenal one day, Musah told CBS Sports : "You never know. I had a great time at Arsenal developing there,

"I still have friends there, the coaches were great, being an Arsenal player in general is great. I loved playing for Arsenal. I've nothing against the club and if one day it turns out to be that it's time to go back then it's possible.

"For now I'm really happy at Valencia and I'm looking forward to carrying this season on in the same way we're doing now."