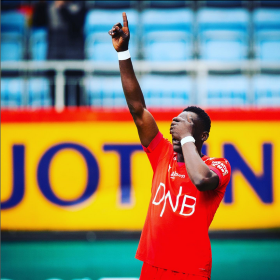 Allnigeriasoccer.com's review of the Nigeria-eligible players that found the net for their respective foreign clubs in league and cup matches on Sunday, November 6, 2022.

We begin in England. Sheffield United loanee William Osula took his tally for the season to four in all competitions after his brace for Derby County in a disappointing 2-2 draw with Torquay United in the first round of the Emirates FA Cup.

Osula finished at the far post to put the Rams in front in the 27th minute and thought he had given his team a comfortable two-goal advantage two minutes into the second half when he arrowed home at the near post, only for the home team to score two goals.

In the Norwegian Eliteserien,  ex-Flying Eagles striker Akor Adams netted his seventh of the season as Lillestrom suffered a 2-1 defeat at the hands of Aalesund.

Midway through the first half, Adams headed in a delivery from Ylldren Ibrahimaj to equalise for Lillestrom.

In the Turkish First League, James Adeniyi was involved in all the goals for his team Tuzlaspor, three in total, in a 4-3 loss to Denizlispor at Denizli Atatürk Stadı.

After setting up Abdoulaye Cissé and Bünyamin Yürür, he scored the game's final goal from the spot in the 80th minute.

Jordan Attah Kadiri has scored in back-to-back matches for the first time in his Lommel career but the goal counted for nothing as his team were beaten 3-1 by Beerschot V.A. at the Soeverein Stadion.

The 22-year-old equalised in the fourth minute but two goals in the second half condemned Lommel to their seventh loss in twelve games in the Belgian Challenger Pro League.

Dele Israel helped BFC Daugavpils claim a 3-2 win over Metta in the Latvian Virsliga, scoring his team's third goal in the 79th minute - his first goal in the division since June 26, 2022.

Mathias Oyewusi has now reached double digits for goals in all competitions after his brace for FK Zalgiris Vilnius in a 2-1 win at FK Suduva in the Lithuanian A Lyga.

He broke the deadlock after 20 minutes and netted his tenth of the season in the 58th minute, which ensured FK Zalgiris Vilnius went home with three points.

In the Maltese Premier League, Oke Akpoveta continued his fine form with his fourth goal of the season in Valletta's 3-0 win over Zebbug Rangers.

Three of his four goals came in his last four matches in the division. He wrapped up the scoring from the spot at minute 80.