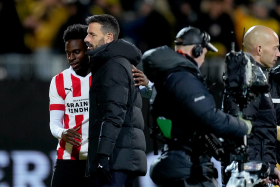 Super Eagles-eligible central defender Emmanuel van de Blaak has been identified as a star of the future at Dutch giants PSV Eindhoven.

His career is now back on track after recovering from a cruciate ligament injury that kept him on the sidelines for ten months.

Born in Lagos, Van de Blaak was at the Willem II academy for five seasons - the same academy that produced flamboyant Arsenal winger Joel Ideho -  and then transferred to PSV in 2020.

Regarded as one the brightest young prospects in Dutch football at the moment, Emmanuel van de Blaak recently made his professional debut for PSV Eindhoven, coming off the bench in the closing minutes of their 2-1 win over FK Bodø/Glimt in the Europa League last Thursday at the age of 17 years and 261 days.

And in doing so, he followed in the footsteps of Funso Ojo and Nonso Madueke who debuted for PSV's first team as teenagers.

PSV have a tendency to give first team opportunities to exciting young players and Van de Blaak would fancy his chances of breaking into the senior squad in the not too distant future.

He has played non-binding games for Netherlands U15 and U17 national teams, all of them friendly matches,  meaning he can represent the Flying Eagles at next year's 2023 Africa U20 Cup of Nations without requesting a change of association.