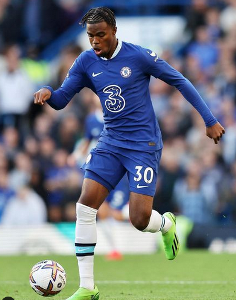 The draw for the UEFA Europa League and UEFA Europa Conference League knockout round playoff and UEFA Champions League round of sixteen took place on Monday, November 7, with at least fifteen Nigeria-eligible players discovering their next opponents in the respective competitions.

We start with the Champions League. Carney Chukwuemeka's Chelsea have been paired with Borussia Dortmund, with the second leg taking place at Stamford Bridge on 7, 8, 14 and 15 March.

Victor Osimhen and Napoli will face Eintracht Frankfurt. The first leg will be played in Frankfurt and the return fixture will be in Naples.

Raphael Onyedika and Antonio Nusa will be hoping to be involved when this season's Champions League surprise package Club Brugge face off with Portuguese side Benfica.

One fixture that catches the eye is Zaidu Sanusi's Porto taking on Serie A giants Inter Milan, The Nerazzurri will be at home, at San Siro, for the first leg.

Moving to the Europa League. Shola Shoretire's Manchester United will face Barcelona in the playoffs.  The two legs will be played on 16 and 23 February, with the winners going into the draw for the Round of 16 on February 24.

Nantes, who have in their ranks Moses Simon, were handed a difficult draw on paper. The French Ligue 1 side have been paired with Juventus.

The Moldovan champions host the Serbians on February 16 and the second leg comes up a week later in Belgrade.

Victor Olatunji and AEK Larnaca will take on Ukrainian opponents Dnipro in one of the eight fixtures.