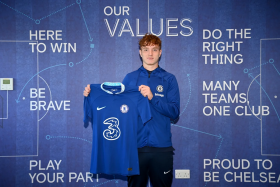 With a statement on their official website, Premier League side Chelsea have announced that Brodi Hughes has signed a new deal with the club.

The 18-year-old has put pen to paper on his first professional contract with Chelsea, keeping him at Stamford Bridge until the end of the 2024-2025 season.

Chelsea's official webpage describes Hughes as 'a versatile player who has been with the club since he was eight, having come through the development centre programme'.

He is comfortable playing as a central defender, left-back, right-back, and as a right wing-back,.

In the current campaign, he started five of the six group games played by Chelsea in the UEFA Youth League.

Hughes enjoys playing with the ball at his feet and has represented England at U16, U17 and U18 levels.