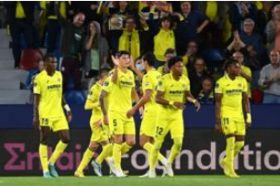 A reunion between Samuel Chukwueze and Spanish football tactician Unai Emery could be on the cards if transfer reports emanating from the English press are anything to go by.

Chukwueze is among three Villarreal players ex-Villarreal boss Emery is interested in bringing to Aston Villa, the others being Nicolas Jackson and Yeremi Pino, according to Daily Star, via Birmingham Live.

The 24-cap Nigeria international has consistently been linked with a move to the English top-flight since his breathtaking performance at the 2015 FIFA U-17 Men's World Cup.

The Super Eagles winger underwent a medical at Arsenal after the tournament in Chile but eventually started his professional career at Villarreal after a breakdown in negotiations.

During Emery's time as Villarreal manager, Chukwueze played in 94 games where he had 29 goal contributions (14 goals, 15 assists).

The 23-year-old was part of the Villarreal squad that won the 2020-2021 UEFA Europa League but did not feature in the showpiece against Manchester United due to injury.

This season, Chukwueze has played nineteen games in all competitions for the Yellow Submarine and directly participated in seven goals,.