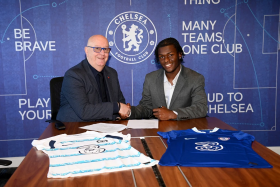 Chelsea announced through their official website on Monday night that Donnell McNeilly has signed a new deal with the club.

McNeilly has signed his first professional contract with the Blues, a deal that will keep him at Stamford Bridge until at least June 30, 2025.

He has been described by Chelsea's official website as 'a very fast, powerful and direct attacking player who was signed as an Under-12 from grassroots football'.

The 17-year-old center forward started the 2022-2023 season as a first year scholar - an intake that included Nigerian youngsters Somto Boniface and  Chinonso Chibueze.

In his final season as a schoolboy, he finished as Chelsea U16s top goalscorer.

Overall, McNeilly has made four appearances in the U18 Premier League and made his debut in the UEFA Youth League in the home fixture against Red Bull Salzburg in September 2022.

McNeilly also possesses the ability to play as a left winger or a number 10.