Barnsley take Nigerian on trial in bid to bolster U21 team, has cited Virgil van Dijk as role model 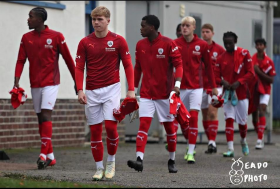 Allnigeriasoccer.com has been told that talented Nigerian youngster Darrin Enahoro-Marcus is undergoing trials at English Football League One club Barnsley with a view to a possible transfer.

A center back by trade, Enahoro has been training with Barnsley U18s and development squad and is hoping to impress the coaching staff in order to earn himself a contract.

The promising defender was a first year scholar at Watford last season, however, it is understood that he wants to move on to greener pastures.

He was one of the standout performers as Barnsley U21s hammered Wigan Athletic 6-1 in a Professional Development League match on Monday, thanks to goals from Alex Anaman, Fabio Jalo, Emmaisa Nzondo and a trialist.

Enahoro has been described by his minders as a ball-playing center back who is composed when in possession of the ball, strong in the tackle and possesses excellent aerial ability, and he has cited Liverpool star Virgil van Dijk as his role model.

Speaking to Watford's official website in June 2022, he said : "I’m an aggressive defender who is always on the front foot. I look up to centre-backs like Virgil van Dijk because of his composure on the ball, and he is a great leader which is something I try to apply to my game on the pitch."