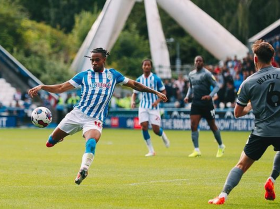 Huddersfield Town manager Mark Fotheringham spoke to the media on Monday before his side's trip to the English capital, where they face Leon Balogun's Queens Park Rangers in the Championship.

The Scottish football tactician will not be able to count on the services of former Nigeria youth team invitee David Kasumu and Chelsea loanee Faustino Anjorin for the match at Loftus Road Stadium.

Kasumu is suspended against the Hoops due to accumulated bookings while Anjorin is still recovering from an undisclosed ailment.

Fotheringham has rued the absence of Kasumu and believes the 23-year-old has been one of the standout holding midfielders in the Championship this season.

Signed from MK Dons in July, the Nigerian has impressed in the middle of the park for the Terriers, averaging 1.8 tackles and 0.6 interceptions per game.

In quotes relayed by Yorkshire Live, Fotheringham stated : "We're missing about nine starters. You're talking Anjorin, Jones - creative players who can score goals - Tyreece Simpson who can score goals, Lees and Pearson are warriors, Kasumu the best ball recoverer in the league, Turton and Yuta who were key to our defence, Hoggy who epitomises everything we do."