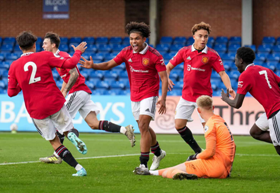 The Red Devils have published the latest training images before Thursday's Carabao Cup third round match against Aston Villa, and it is confirmed that the England U19 international took part in the training session at Carrington.

Shoretire trained with the senior team before the Europa League and Premier League meetings with Real Sociedad and Aston Villa respectively but was an unused substitute on both occasions.

In his first domestic Cup clash as Manchester United boss, Erik ten Hag may decide to hand some key players a well-deserved rest with an eye on the upcoming Premier League clash against Fulham.

Most Premier League managers use fringe players in the early rounds of the Carabao Cup, brightening the chances of Shoretire making the match day squad for the third consecutive game.

The 18-year-old, a nominee for the Premier League 2 Player of the Month for October 2022, has not played for Manchester United's first team since the final day of the 2021-2022 campaign at Crystal Palace, where he came off the bench for the last fifteen minutes.