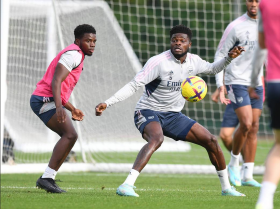 Teenage winger of Nigerian descent Nathan Butler-Oyedeji is seemingly in contention to be named in Arsenal's matchday squad against Brighton & Hove on Wednesday night.

The Gunners are aiming to make it four wins in a row in their penultimate game before the start of the 2022 World Cup.

Butler-Oyedeji was promoted to first team training by Mikel Arteta in their final workout before the visit of the Seagulls to the Emirates Stadium.

The Spanish football tactician had admitted that he is going to pick a competitive team for the meeting with tBrighton & Hove, so it remains to be seen whether or not the Anglo-Nigerian will be summoned for the third round Carabao Cup clash.

The 19-year-old has not been called up for a first team game since signing a professional contract at Arsenal in the summer of 2021 but frequently trains with the senior squad.

Blessed with both pace and dribbling ability, Butler-Oyedeji netted three goals against Football League opposition in the group stage of this season's Papa Johns Trophy.

Central defender Zach Awe and winger Joel Ideho trained with Arsenal's first team before the London derby against Chelsea, but were not spotted in today's training images.