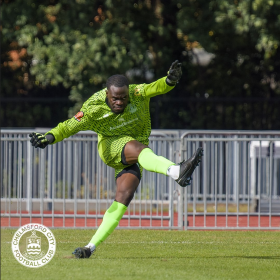 The Gunners loaned out the Anglo-Nigerian goalkeeper to the Clarets in the summer transfer window to prepare him for the rigours of first team football, and the number of clean sheets he has posted since joining the sixth-tier club is a testament to his ability.

Chelmsford City have the best defensive record in the top six tiers of English football, having conceded nine goals in sixteen games, largely due to the form of the talented goalkeeper.

The 19-year-old posted a clean sheet as Chelmsford City were held to a goalless draw by Dover Athletic on Monday.

Adding to his previous clean sheets he registered in the division against Slough Town, Chippenham, Oxford City, Taunton Town, Farnborough, Cheshunt, Eastbourne and Bath City, it brought his tally to nine in thirteen league matches.

Ejeheri's loan deal with Chelmsford City runs out in January 2023.